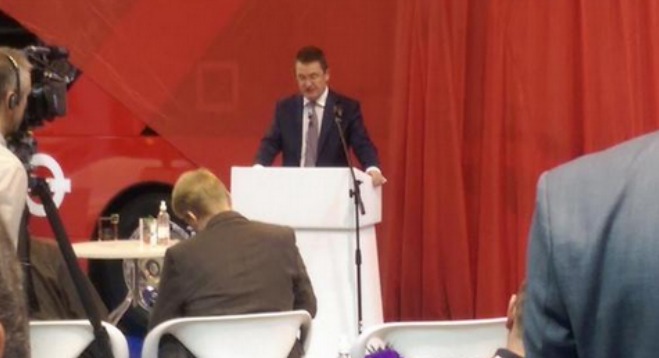 Multi-million pound deals, stylish new bus designs and achieving a 46 per cent share of the UK bus market have contributed to a potentially record-breaking year for Alexander Dennis, says its chief executive officer.

CEO Colin Robertson, who has headed the company since 2007, revealed that the company will have manufactured more than 2,500 buses by the time the year draws to a close.

“[That is] twice that of our principal UK manufacturing competitor,” he said.

“These vehicles will be split 50-50 between home and export markets and, in addition, we will body around 200 coaches at our Scarborough facility.

“All of that will push our turnover up from £500m in 2014 to £600m this year and similarly, I expect to see a significant increase in our underlying profitability, a large part of which will fund our ongoing £15m investment programme.”

He said that in the past 12 months, ADL had won 46 per cent share of the UK bus market.

With busy production lines at factories in Central Scotland, Yorkshire and Surrey – in addition to demanding delivery schedules during the next three months – Mr Robertson said he expected the business to remain “comfortably” ahead of its rivals at years’ end.

At Coach & Bus Live at the NEC in Birmingham, attended by the Mistral Group, Mr Robertson unveiled a stylish new double deck bus, the Enviro400H City, which he said had already secured orders in London worth millions of pounds.

ADL also revealed plans for two further products designed specifically for export markets, one of which the company said was already the subject of a £250m deal.

Regarding the Enviro400H City, Mr Robertson told the Expo: “It is set to introduce not only a contemporary, stylish look but an enhanced passenger experience.

“Furthermore, it is a combination of revolution and evolution, building on the proven technology that has made our low-emission hybrids market leaders – and established them as best-in-class in terms of fuel economy, reliability and durability.”

Its features include a raked wrap-around driver’s windscreen, a glazed stairwell, hopper vents in both the lower and upper deck windows and a range of other design features to reduce solar gain.”

He also revealed news that  a £250m deal for up to 400 buses in Toronto, Canada, will involve the design and manufacture of a “SuperLo”, three-axle Enviro500 double deck.

“It will carry 83 passengers and has been designed to overcome the numerous low bridge restrictions that currently curtail double deck services in many parts of Toronto and the Greater Hamilton region.

“The initial order is for 250 vehicles with an option for a follow-up 150 and we are now forging ahead with the establishment of a 45,000 square foot chassis manufacturing facility in Toronto to support this initiative.

Elsewhere, ADL will deliver 900 double decks to Hong Kong this year, securing 80 per cent of the market, while it is also in the process of introducing a mix of 120 single and double deck vehicles into Kuala Lumpur, Malaysia.

In New Zealand, the company has dubbed as a “major break-through” a decision by that country’s government to relax weight restrictions on trucks and buses, resulting in ADL winning orders for 39 high capacity Enviro500 double decks.

These will be bodied by Kiwi Bus, ADL’s build partners in NZ and the majority will operate in the Auckland area.

ADL said one third of its announcements will impact on a market nearer to home, namely Switzerland, where the country’s biggest supplier of road-based transport – PostAuto – which operates over 2,200 vehicles, has indicated its intention to introduce a fleet of 19 double decks.

This is ADL’s first double deck order in Continental Europe and all 19 will go into service on challenging, steep incline routes around the St. Gallen area where a demo vehicle performed well in trials this summer.

The first of the Enviro500s, all of which will be three-door, two-staircase models with complete flat floors, will go into operation in the last quarter of 2016.