The Launch of the new Cheetah XL

Since the last of the Vario based Cheetahs were delivered last year, many coach operators have been eagerly awaiting the launch of its successor by ADL Plaxton. Last years’ EuroBus show saw the first glimpse of what was to come, when computer generated images were previewed on the ADL stand. The indicative images suggested a significantly larger vehicle based on the Mercedes Atego chassis, coupled with a stylish new coach body that echoed many of the styling themes seen in Plaxton’s 12m Leopard range.

Well, the wait is now over, as ADL Plaxton last week launched the new Cheetah XL to a select audience of press and customers at its Scarborough factory.

Colin Robertson, ADL’s Chief Executive, took the wraps off the new model, revealing it to be a much larger and more imposing midi-coach compared to its smaller predecessor. The new vehicle seats 35 passengers with an optional 36th passenger seat or courier seat fitted as standard. The coach is based on the larger 11 tonne Mercedes Atego chassis, compared to some of its rivals which have been designed on smaller weight, such as the Atego or Iveco chassis.

An impressive number of forward orders had already been secured prior to the launch, including an allocation of 10 vehicles by Mistral that will be delivered to us in May, June and July. The launch models on display were all pre-sold to customers and showed a number of different layouts including saloon based toilets and serveries. 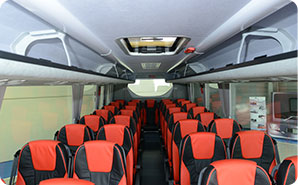 The Cheetah XL has started its life to rave reviews and we’re sure that once deliveries commence in the next few weeks, it will quickly establish itself as the new choice for discerning coach operators looking to operate a true mid-sized coach.

We at Mistral have got 10 Cheetah XL coming to us in the following months, and we would welcome the opportunity to talk to any operators interested in seeing the vehicle over the next month.

We use cookies to ensure that we give you the best experience on our website. If you continue to use this site we will assume that you are happy with it.Ok